It is always the right time to do whatever we can to combat food insecurity. I feel so strongly about this topic that in order to bring my intensity down a notch, I often get a little slap happy with wordplay.

Can you guess which word is my word du jour? Go ahead, I’ll wait. *softly singing the Jeopardy theme song*

Do a little jig if you know the answer. You could even do the can-can!

It’s uncanny how easy it is to figure out, isn’t it?

How Can You Combat Food Insecurity?

When people think about hunger, they often equate it with extreme poverty and, furthermore, their assumptions about what poverty looks like.

The USDA’s most recent definition of hunger, however, creates a new distinction. Hunger is defined as, “an individual-level physiological condition that may result from food insecurity.”

What is “food insecurity,” you ask? Food insecurity is, “the state of being without reliable access to a sufficient quantity of affordable, nutritious food.”

It is therefore very important to be aware of the current state of food insecurity in the United States in order to gain a better understanding of the true depth of the issue and the steps we need to take to bridge the gap for those in need.

Can You Believe Food Insecurity Is Only 12.7%?

So let’s talk about some facts that will help us put our head around food insecurity in the United States.

I’ll admit, when I first saw that number and looked at the chart below I was surprised at how “small” the food insecure piece of the pie was. 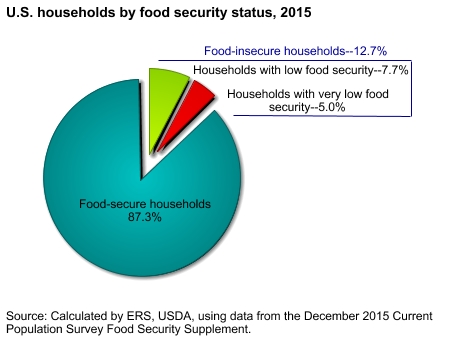 But then I took a closer look at the true number that 12.7% represents – 15.8 million households. To have a full understanding of what that number means, you have to take it one step more because a household may contain one or more people. So we still have to go one more step.

And those numbers? They are staggering.

Simply put, this is over 42 million people who, on a daily basis, are not sure they’ll have enough food to make it through their week much less their day. And just think about how poorly you function on those days when you missed a meal or forgot to snack. These are households who regularly have to work through their hunger and all of the things that result from that situation.

I won’t go into all the consequences of having 42 million people who are food insecure because there are plenty of organizations that can provide you with extensive information.

What I want to do instead is share one of easiest things you can do today to help those who are food insecure.

Food banks are used by all kinds of people – some of whom you’d never guess need assistance. So, keeping local food banks stocked with the foods they need most is very important. One of the most straightforward and simple ways to contribute is donating canned goods.

A food bank’s most needed canned goods typically include:

The beauty of canned goods is that they are not usually very expensive and even go on sale regularly at local supermarkets. The big box stores like Target and Walmart also have great deals on a daily basis.

This means supporting your food bank is as easy as picking up some extra cans while you’re already doing your weekly shopping.

Throw Food Insecurity In The Can

It’s simple: People cannot function or stay well without food. Not to mention, healthy people contribute to the health of the community.

When a household does not have reliable access to affordable and nutritious food, being and staying healthy is a constant uphill battle.

So let’s throw food insecurity in the can and donate canned goods whenever we are able. You can find your local food bank by using this tool from Feeding America.

Easy Home Canning: How To Pickle Carrots | Goods Giving Back

[…] can combat food insecurity by donating canned goods to your local food banks and, to keep  your own hunger at bay, why not […]